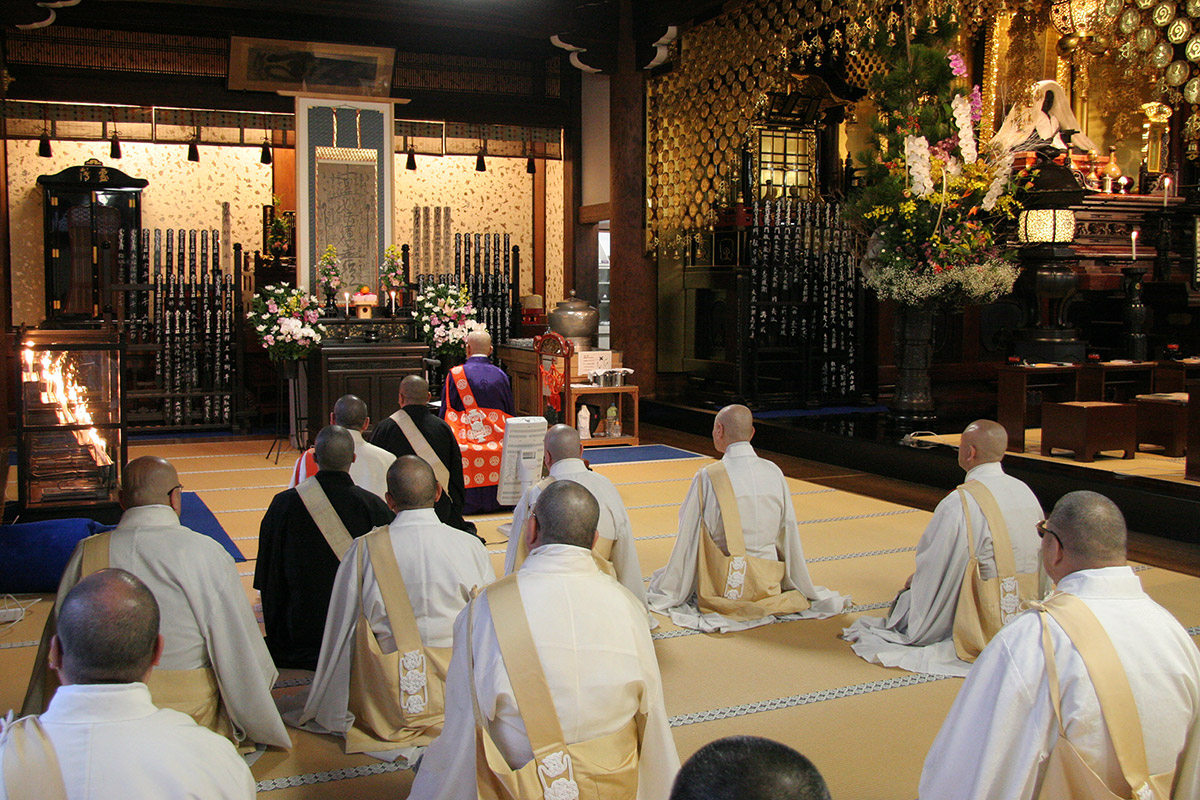 Coming down from the inner chamber, Koyu Shonin (the HBS head priest) and other priests chant the Odaimoku loudly to the Kaiko-kinen Gohonzon (the object of worship which Kaido Shonin himself drew commemorating the foundation of HBS) with lay followers in the outer chamber where a special altar is set up.

January 12th is the anniversary of HBS foundation. In 1857 (the fourth year of Ansei period), Kaido Shonin founded a followers association, Honmon Butsuryu Ko in Asashichi Tanigawa’s house, Shin-machi Takoyakushi, Kyoto when he was forty-one years old. Ko represents “a group of priests and lay followers who study together Buddhist scriptures,” so Honmon Butsuryu Ko was just a group of Kaido Shonin and his enthusiastic followers that seek the truth of Buddhist teachings within Honmon Hokke sect at the time.

The faith in the Odaimoku, Namumyohorengekyo which the Primordial Buddha handed down to us, ordinary people (foolish beings) who live in the latter days of Buddhism (Mappo period), had been inherited from Nichiren Shonin to Nichiryu Shonin, however, the teachings of their school was not received right at the end of the Edo Period. To remove mud from the clear water of Nichiren teachings just like Nichiryu Shonin had done about 100 years after Nichiren Shonin’s death, Nissen Shonin decided to open a new school under Honmon Hokke sect. He organized Honmon Butsuryu Ko with just six followers of him.

In 1947 (the twenty-second year of Showa period) after World War Ⅱ, the Religious Corporation Ordinance which was established and enforced on December 28, 1945, and the regulations on religious corporations were abolished, and then Honmon Butsuryu Ko became independent from Honmon Hokke Sect and officially renamed itself as Honmon Butsuryu Shu (Shu means “sect”). On January 12th, the foundation anniversary of HBS, a special memorial service called Kaiko-kinen Soko (also see article Osoko [Goshugyo]) is held at HBS temples across the country for the purpose of repayment for indebtedness to Nissen Shonin. In Japanese, Kaiko literally means “foundation” and Kinen means “anniversary” or “commemoration.”