Home » Teachings » Q and A » Purple in Buddhism
Q and A 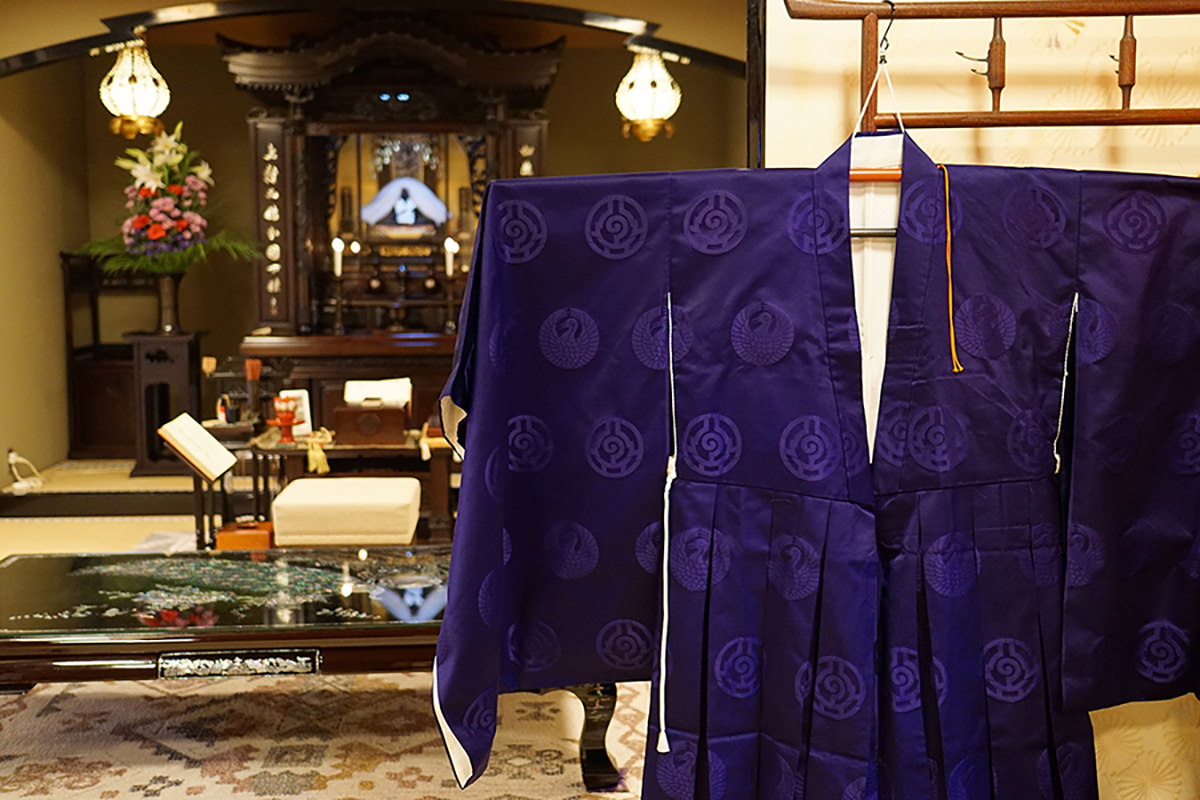 An HBS member in Brazil told me that the purple robes of our head priest are so cool and asked me why his robes are all purple. In HBS, the highest grade priests called Dai Sojo (Dai means “great,” and Sojo is “appropriate priest”) and the second-grade priests Gon Dai Sojo (Gon means “pre-“) are only allowed to wear purple robes. By the way, the highest-ranked priest Koyu and retired Koyu priests Koson qualifies themselves as the grade Dai Sojo, and the top 18 priests in So Jo (the third grade) are automatically promoted to Gon Dai Sojo following Dai Sojo. Anyway, in short, higher grade and limited numbers of priests are only allowed to wear it in HBS. I’ll write about the special importance of purple color in Buddhism. Its origin goes back to ancient China.

From ancient times, three big religions, Taoism, Confucianism, and Buddhism have flourished throughout Chinese history, and among those, Taoism especially has brought great influences to Japanese Shintoism. The concept of Shintoism is derived from Taoism, and most of what Japanese Shinto says is said in Chinese Taoism.

In Taoism, purple has been recognized as a valuable and noble color since a long time ago and it has been used for clothing that is worn by members of the nobility and for something precious. It is said that the reason is that purple was difficult to be produced from the nature world. Shintoism, the oldest religion in Japan, of course, has been influenced by that, and then the way of thinking has also taken root in Buddhism which has lived in harmony with Shintoism for centuries. During the period of Emperor Suiko (593-628), the first system in Japan to rank officials into 12 levels called Kanni Junikai was established, and the color of clothing which the highest grade called Daitoku wore was purple. Having originated in this, admirable Buddhist monks of long ago were not allowed to receive Dai Sojo grade and wear purple robes without obtaining Imperial sanction. Therefore, those who wore purple robes in ancient times were only select few Buddhist monks appreciated by the emperor.

This system lasted until the end of World War II, but under the Religious Corporation Ordinance which was newly established after WW II, all Buddhist sects in Japan became able to choose what colors of robes to wear by themselves. Since Honmon Butsuryu Shu was at first a Ko (a group of priests and lay followers who studied together Buddhist doctrine to seek the truth of Buddhism) within Honmon Hokke Sect when it has started and priests of Honmon Butsuryu Ko were also priests in Honmon Hokke Shu, they had to follow the rules in Honmon Hokke Sect about everything including the color of robes. Through these processes, head priests and other high-grade priests in HBS and other sects originated from Nichiren now wear purple robes just like priests of Honmon Hokke Sect did. On the other hand, scarlet robes are exclusive to head priests in Shingon Sect and Jodo Shin Sect while So Jo (the third grade) priests in HBS are supposed to wear them. Purple robes are for second-grade priests in those sects (if I remember correctly). The rules of colors are quite different from each other.

In this way, Koyu Shonin, the head priest of HBS, wears purple robes, and the rule was established after WW II.

For your information, it is said that clothing colored in Fuka Murasaki (blackish deep purple #493759) was given to higher-ranked officials in Kanni Junikai while lower-ranked officials received Asa Murasaki (thin purple #C4A3BF) robes. Therefore, it can be said that the Japanese have especially put a higher value on these two purples from ancient times among purples in Japanese traditional color. Nevertheless, no particular kind of purple is defined for Dai Sojo’s and Gon Dai Sojo’s purple robes in HBS. Even a robe specialty shop that is a purveyor to HBS told me once that they do not know well about the definition of purple and have any interest in the difference between purples. This means it is OK as long as they are “purple” in a broad sense. The robe specialty shop also said like this, “the purple of Kairyofuku (casual robe with shorter sleeves and length) is only determined as Kodai Muradaki (slightly reddish, dull purple) within schools of Nichiren sect including HBS!” This is so funny, isn’t it? We do not have an interest in the purple of purple robes as we used to.