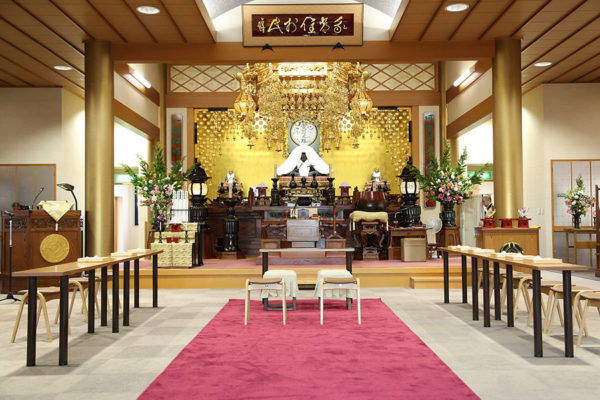 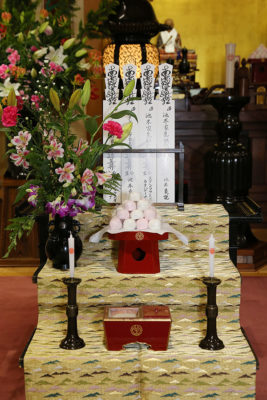 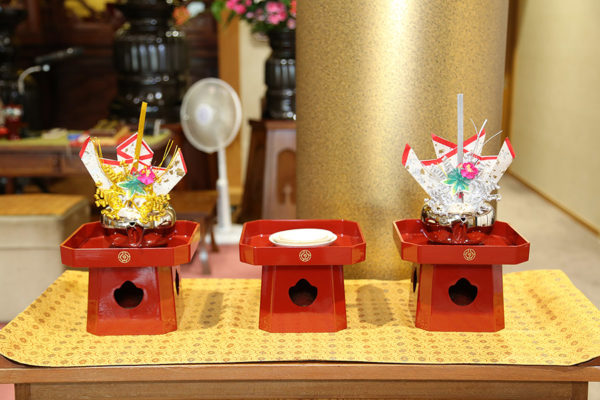 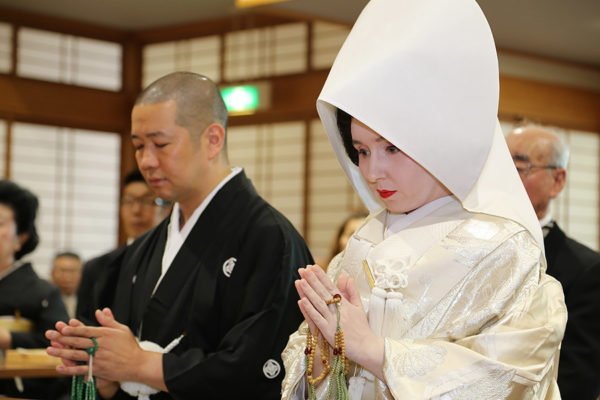 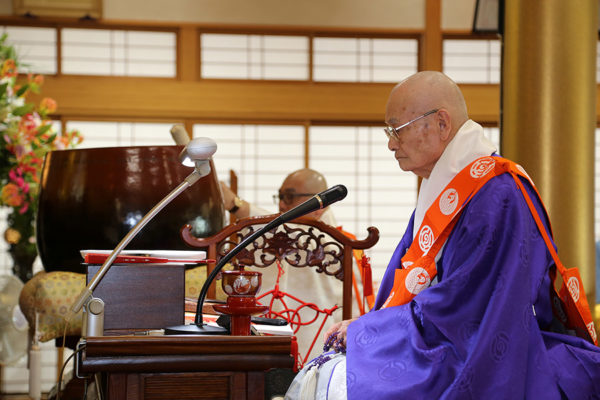 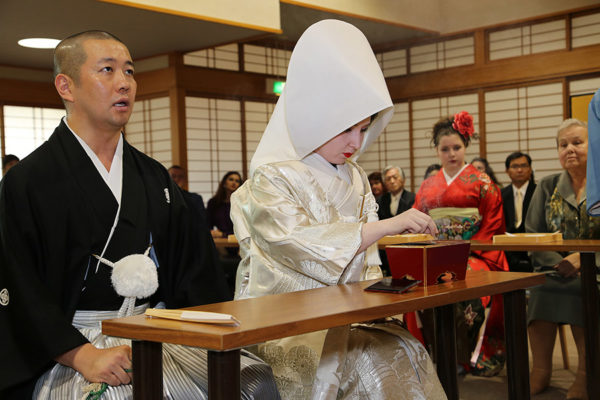 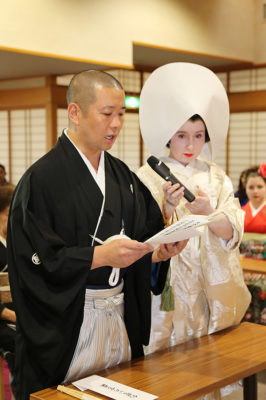 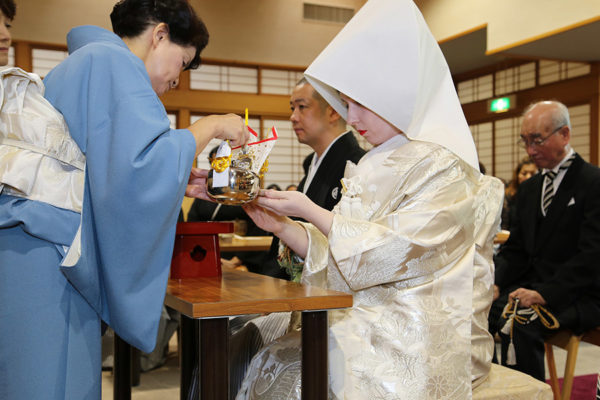 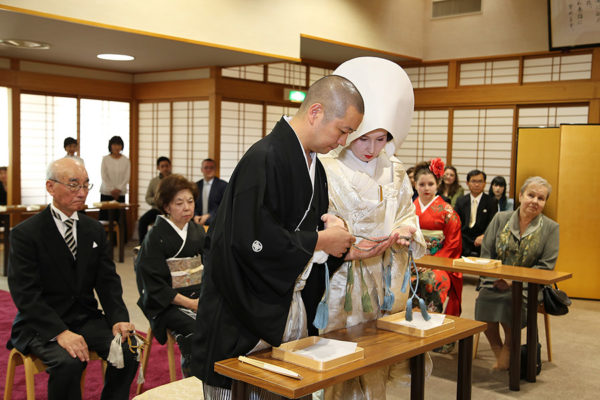 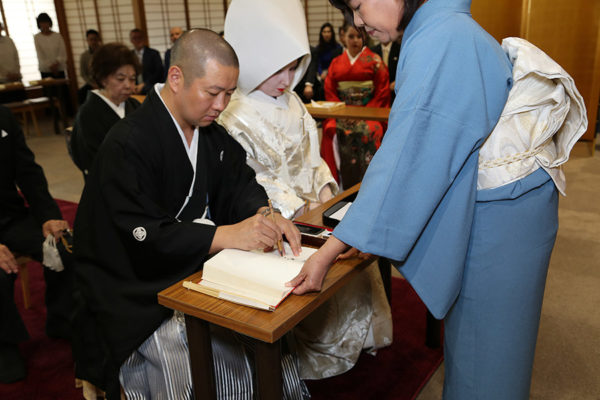 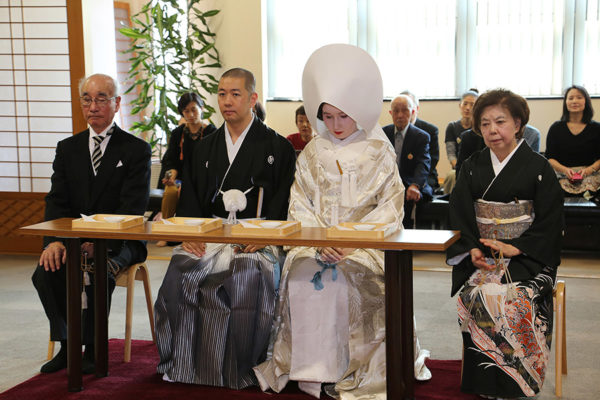 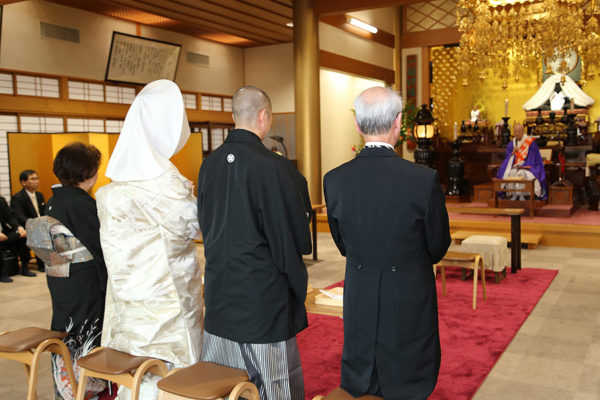 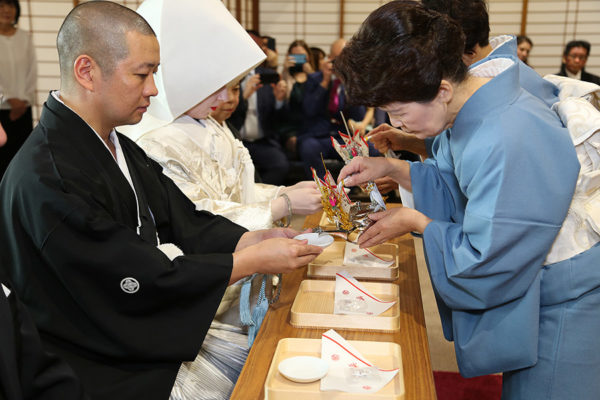 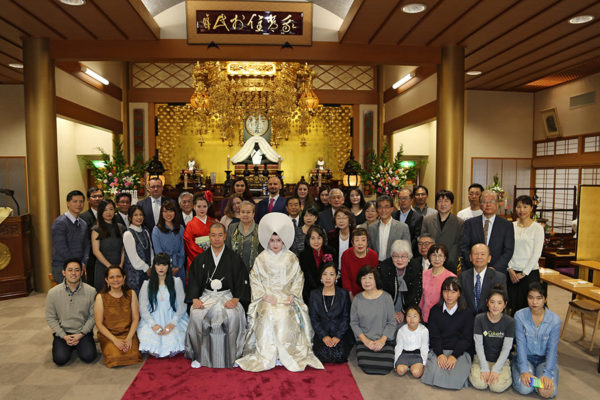 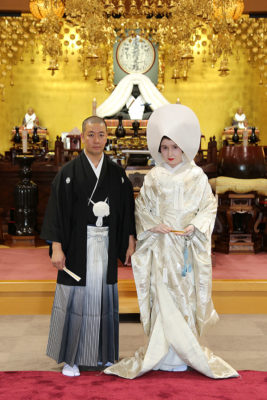 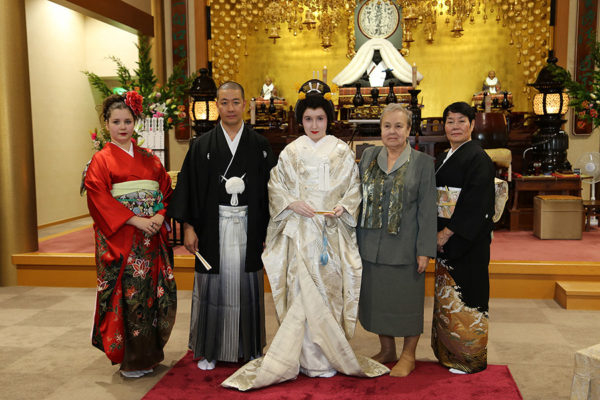 Japanese weddings are a very confusing topic for me. You can often see pictures of brides clad in white wedding kimono called shiromuku taken by lucky tourists visiting Shinto shrines at just the right moment. However, it seems this kind of traditional Japanese wedding is slowly disappearing, as young Japanese women are more drawn to Hollywood romanticism of wedding dresses. Japanese people I talked to have been saying that currently about 80% of weddings are the so called Western Style weddings. That basically means a church wedding with white dress and tuxedo and all the other details, including even a fake priest (I hear it’s a very nice part time job for foreign guys here ^_^). Yes, most of Japanese people are not Christian, but you will find a lot of fake churches in Japan, built only for the sake of weddings and usually they look much more grandiose than the real tiny churches snugly fit between houses and attended by the small local Christian community on Sundays.

Anyway I don’t really know much about organizing a wedding back in Poland, as I never had to do it. Maybe it’s also crazy in some way… However, after coming to Japan I heard a lot of stories from Japanese people, both men and women, about their weddings and how they came to be. The weekly meetings with wedding planners for a few months to select everything from flowers to dessert spoons, very complex attractions for the wedding reception including self made videos and artistic programs, a few costume changes to be able to include white dress, colored dress and kimono, numerous photo sessions and some other crazy stuff. One guy had to sell the car he worked a long time for and really dreamed of to be able to pay for the wedding that his wife-to-be desired. And all that for a ceremony and party that together last about 3 hours. I mean seriously – THREE hours! Now imagine how much of that time the bride and groom are actually present if all they do is keep changing clothes. ^_^ Most people reported they couldn’t even try the food they were choosing with such care because they had no time for it.

So, as you can imagine, when I realized my wedding will be held in Japan, I was a little worried to say the least. Will we have to spend countless hours thinking of every completely irrelevant detail of the ceremony and party which nobody will even notice? Will we have to spend most of our wedding changing outfits like some fashion obsessed celebrities? Will we really have to spend a small fortune just on three hours of our lives? Will we have to…? I couldn’t imagine myself doing any of that, but I didn’t want to disappoint my future husband so I avoided any conversations about wedding, thinking it’d be much better to let him have the initiative and just try to adjust. It was very stressful! Finally he started the topic by explaining that of course our wedding ceremony would have to be a Buddhist one held at the temple where he serves, so what follows we have to wear traditional Japanese attires. So far so good… And then he asked if there was anything special I wanted to do for our wedding. And well… I really regret I didn’t take a picture of his astonished expression when I said “as little as possible”. As he seemed pretty confused by my answer, I proceeded to explain I don’t really care about any details and as far as I’m concerned simple is best. I think that might have been the moment when I heard a big sigh of relief ^_^.

Anyway, as I had no idea what a Buddhist wedding looks like and searching for it online led me to countries like India or Tibet, I started asking random Japanese people about it. Very soon I learned that Buddhist weddings are pretty rare. Much more so than the traditional Shinto ceremonies (which as I said before probably constitute only about 20% of all weddings in Japan nowadays). Basically it’s mostly Buddhist priests who are married in a Buddhist way at temples, which kind of makes sense, especially that for most people in Japan Buddhist temples have more to do with funerals than weddings (but that’s a separate long story for another time). Basically none of the Japanese I knew had ever seen a Buddhist wedding in their life and what follows they had no idea what it looks like.

However, now I have already been through it myself, I have some first hand information, so let me briefly explain what actually happens during such a ceremony.

When we entered the main hall everyone else was already seated except the officiating priest – all the guests and of course our families on seats specially prepared for them. After we managed to somehow sit down (which is not so easy in a Japanese wedding kimono), the main priest came with his assistant and the ceremony began.
Actually a wedding ceremony starts exactly the same way as any other Honmon Butsuryū Shū service or ceremony. We first recite opening prayers and then chant Namu Myōhō Renge Kyō. During the chanting bride and groom offer incense praying for peace of their ancestors’ souls. It is the first symbol of joining together two families – from now on we will pray not only for our own ancestors but for each other’s as well.

After the prayers are finished, bride and groom take three sips of Japanese sake each from three different sized cups (or actually saucers, but whatever ^_^). This is not really related to Buddhism per se. It’s an old Japanese wedding tradition from Edo period called San San Kudo (three three nine times) which symbolizes joining the couple, as 3 or 9 cannot be divided by two. I am pretty sure they perform it the same way in Shinto. There are a lot of different meanings ascribed to it and also some variations, but let’s not get into details.

Next there is much more important part of the ceremony. The groom reads the couple’s vow, which is actually more a vow to Gohonzon (the mandala which symbolizes the living Buddha in HBS) than to each other. Simply speaking, it’s about us thanking Buddha and our families for being able to safely get married at the temple and start a new family and promising to respect and support each other as husband and wife obeying Buddha’s teaching and join our powers to spread it in the world. After the groom reads the vow, the bride only confirms it with her name at the end. This is probably the point when we can think “OK, it’s official now, there is no way back – we just got married” – like saying “I do” in Christian ceremony I guess? When the reading is finished, the written vow is given to the officiating priest, who in our case was actually also my husband’s master and teacher.

After that we exchanged Buddhist prayer beads (Ojuzu) instead of rings. It’s an old tradition in Buddhist weddings but, because the custom of exchanging rings which came from the west is now popular, it’s probably rarely done. I really like the symbolism of that part. I think it confirms our resolve to continue our Buddhist practice together and support each other on that path.

And then there is a part to officially mark our wedding in the temple documents – we sign our names in the “wedding book”. With that the ceremony is complete. All that is left is for us to listen to the speech off the officiating priest, have a toast of Japanese sake together with our families to celebrate and then take a lot of pictures. ^_^

Anyway, one thing I’d like to point out is that wedding ceremony at the temple or shrine or any other fancy ceremony you can imagine and organize has no binding legal power in Japan at all. If you want to get officially legally married you just go to the city office and file in an application. That’s all. It takes about 10 minutes and I think it’s pretty awesome in its simplicity.