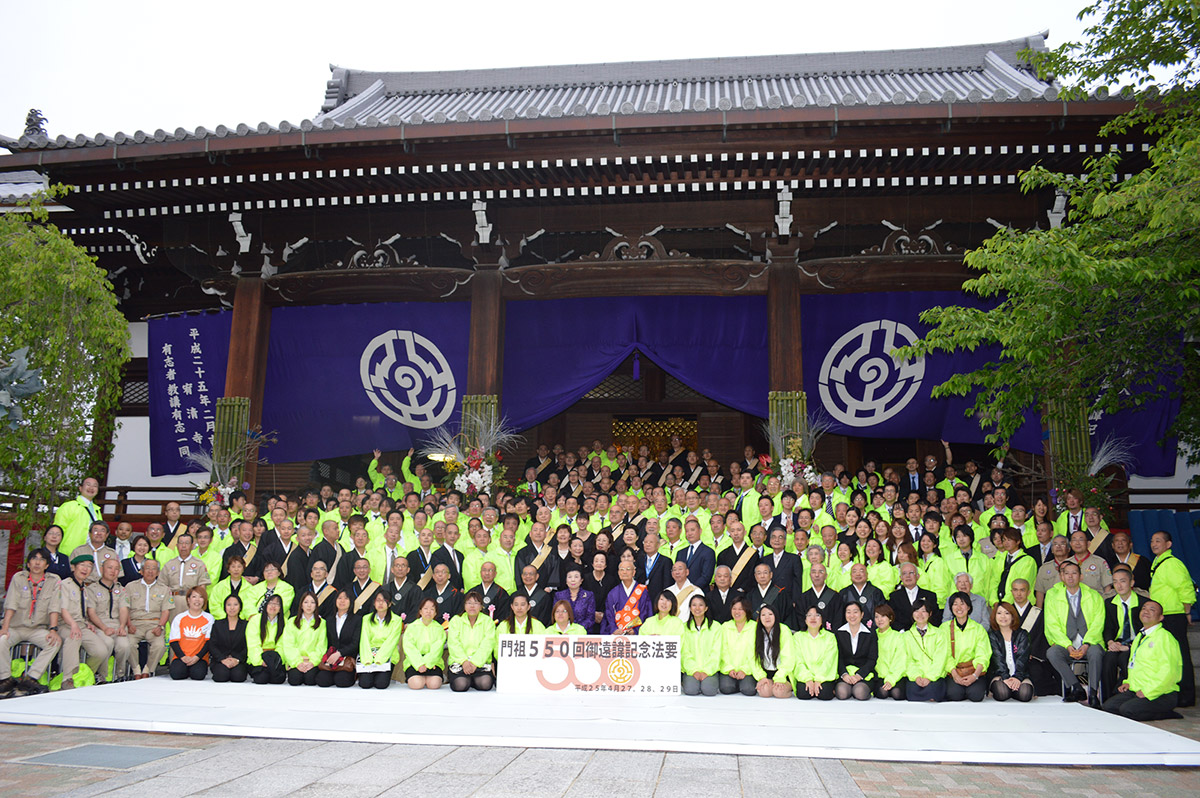 To give a conclusion first, Yes, we are all followers of Honge Bodhisattvas without a distinction between priests and lay practitioners. Nissen Shonin gave us an instructive poem about what type of people is a bodhisattva:

Without a distinction between lay believers and priests,
People who try to help others with the Odaimoku
Should be called bodhisattvas.

The image of spreading the Odaimoku to others, manifesting Gensho no Goriyaku (meritorious reward) and saving ordinary people of Mappo period are just proof of bodhisattvas. We, priests and lay believers, are all the lowest ranking of Jogyo Bodhisattva’s disciples.

And are Kyomu-san (HBS priests) not needed? Yes, they are needed! Let’s take a look at the reasons below:

1. Their regular vocation is specialized in propagation.

Whereas lay followers continue doing jobs to maintain their households, priests engage themselves in teaching and propagating waking or sleeping. This means priests are running ahead of a group of our sect. They chant the Odaimoku, serve the Gohonzon and study doctorine more than lay believers. To expand propagation, the leading runners are necessary.

To enter the priesthood is called Shukke (出家). Shutsu (出) literally means “leaving.” Ke (家) means “home.” So, once a person left home, that means, entered the priesthood, he or she must devote his or her body, life and property to propagation without clinging to any other things.

Ho-chu-jiki—Food, clothing and housing given by the Buddhist law

There is a word “Ho-chu-jiki (法中食).” Ho (法) means “the Buddhist law,” Chu (中) means “in,” and Jiki (食) is “food.” This term means that priests will never be unable to make a living unless they constantly serve the Fine Dharma. When spreading the teaching, thanks to the merit, food, clothing and housing are guaranteed. In other words, priests concentrate on and engage in propagation without having anxiety about living.

Therefore, HBS priests are fundamentally high caliber practitioners of the Lotus Sutra and the center and driving force of HBS for propagation.

2. No gold medal can be won without an efficient coach.

HBS priests play an important role to unite minds of Nichiren Shonin and HBS lay believers and have them to receive Gensho no Goriyaku (meritorious reward) smoothly. Like athletes find excellent and efficient coaches to get a gold medal at the Olympics, HBS members must follow what priests teach. HBS priests always study the Three Great Masters’ instructions and guide lay believers based on the instructions. No one can achieve his or her goal without a mentor.

In pursuing the path of Buddhism, priests serve daily to the Gohonzon and their masters. Through the serving, they obliterate the ego and absorb genuine faith receiving meritorious reward from the Gohozon and seeing their masters’ behavior as a living model of our faith. And then, lay believers learn pure faith viewing priests from behind.

3. There is always the distinction among No-jo in everything

Like there is a deistinguish between true and expedient among Buddha’s teachings, we must follow the distinction of No-jo (能所) in everything. No (能) literally means the status of a master who teaches, and Jo (所) means the status of a disciple who is taught. Or, it means the causing side and the resulting side. The order to give and learn the teaching is clear and obvious as shown in the style of main hall of a temple. The Gohonzon and the Three Great Masters are always in the inner most sanctuary, priests sit in the inner sanctuary, and lay believers worship in the outer place. This disposition is the distinction of No-jo.

There is a story. There were a several lay believers in a foreign country who thought they mastered HBS faith on their own and could become founders of new sects without priests coming from their self-conceit. They left HBS leading many other weak-willed followers, but they became aware that no meritorious reward would be manifested disregarding No-jo. Consequently, none of those sects survived.

In this way, there is the line drawn between priests and lay followers, however, we are actually all bare and equal under the Buddha’s eye based on faith. Even the No-jo between the rank of Noke and Shoke of priests or the differences of the color of priests’ clothes and robes based on the rank is just a system designed by the priests themselves who are nothing more than ordinary people in Mappo. It also can be said that lay practitioner put themselves in the modern society, blend in the real world, and have advantage to coming into contact with and convert those who are truly suffering in this Saha world. However, they first need to learn what is HBS faith from priests on converting others.Therefore, both priests and lay practitioners have important role and, the attitude of being haughty and insolent to other priests or lay followers is outrageous. It is true that priests are the most diligent in propagation, so serving them as if they were Nichiren Shonin makes us accumulate much merit. On the other hand, slandering them causes sins in our minds. In short, if we do as we are told by priests, meritorious reward is manifested. If opposing, terrible retribution is at hand. “Following and Obeying (信伏随従)” is essential in HBS faith.

To wrap up, let’s look at an instruction given with the Gokyoka above:

The Shukke (priesthood) of Mappo means the persons who dedicate themselves to the bodhisattva practice for propagation, and they are called servants of the Buddha. Being overly concerned about form, distinguishing between priests and lay believers is just an argument of no merit to judge whether having or not having faith. People who prefer this argument are called Demo-konjo [people who became priests in order to just feed themselves without pursuing Buddhist path]. They are not real disciples loyal to Nyosetsu-shugyo [practices upon the Buddha’s maxim (teachings of the Lotus Sutra)].