Home » Sermon » What is the true meaning of “helping others”?

A merciful heart to save people
by chanting the Odaiomku
is just proof of a Bodhisattva.

The will to save others by both chanting ourselves and having them chant the Odaimoku can make manifest evidence of meritorious rewards actually happen under their eyes. This way of salvation is our HBS faith. This is just the thing called the Bodhisattva practice. Today’s Gokyoka instructs us in this way.

There is no safety in the threefold world;
it is like a burning house,
replete with a multitude of sufferings，
truly to be feared,
constantly beset with the griefs and pains
of birth, old age, sickness and death,
which are like fires
raging fiercely and without cease.

Let’s look at the world where we live. It is the unbearably agonizing world. We constantly suffer from the four inevitables in human life—birth, aging, sickness, and death. Human beings desire to live and are driven to avoid aging, sickness, and death which are all hindrances to living. We waste our life spending most of our money, time and energy to keep ourselves youth, maintain health and live longer. However, are we really living a happy life as we expected? Of course, not. It is true that it is difficult to escape from those sufferings by our own efforts.

Then, The Buddha continues in Simile and Parable:

But now this threefold world
is all my domain,
and the living beings in it
are all my children.
Now this place
is beset by many pains and trials.
I am the only person
who can rescue and protect others.

This statement expresses the Buddha’s deep compassion for us, and then He reveals the quintessence of the Lotus Sutra, the Odaimoku—Namumyohorengekyo to save and help us escape from the threefold world. By entrusting the powerful energy of the excellent merit of the Odaimoku with all such bad phenomena and good phenomena, every problem that we are not able to solve on our own will be resolved so that the result could be surely beneficial to us. The merit of chanting the Odaimoku frees us from the sufferings of aging, sickness, and death, and we can realize that the Saha World where we endure various afflictions and pain is, in fact, the Pure Land of Tranquil Light as it is. And furthermore, we can receive a great reward of entering the “real” Pure Land of Tranquil Light in the future (after death) thanks to the merit.

Nichiren Shonin states his joy of encountering the Odaimoku in his treatise as follows:

Although to be born as a human being is rare, I was born as a human being. Although to be converted to Buddhism is also rare, I could come across Buddhist teachings, especially the Odaimoku of the Lotus Sutra. Now, I have finally become a practitioner of the Lotus Sutra. I verily think that it is because I have held memorial services for ten thousand billion [countless] Buddhas in the past life.
[Jakunichibo Gosho—A Letter to Jakunichibo]

In Buddhism, life in this world is the destiny that results from the previous life. It is extremely rare to be born as a human being in the existence of innumerable living organisms, large and small, in the universe. Moreover, encountering the Odaimoku—the Fine Dharma handed down from Jogyo Bodhisattva, which saves us in both present and future life, is a most fortunate thing in human life. Therefore, we, HBS members, should devote ourselves to save others with the Odaimoku as long as we have breath to repay the obligation of being able to come across the Odaimoku.

There was a female priest long ago, who was a disciple of the 8th HBS head priest, the Reverend Nichikan and served his wife night and day. The priest had the power of clairvoyance when she was a laywoman, and it was a piece of cake for her to read the time on a clock on the first-floor being on the second floor, count exactly the amount of money in someone’s wallet, or read other people’s mind. Of course, she was making use of the power to convert and advise others in her daily missionary work. Having seen the power, her senior one day advised her: “Such power is just like a telescope, which only you have and we don’t. But, you cannot see one’s far future or distant past even if you use it. This means, your advice through the power is not always right and nothing for the person’s present and future life, compared with the Buddha’s eye which is able to see through one’s past, present and future life. It can only tend to mislead people. Try to save others with the power of the Odaimoku which is able to guide them correctly and pray to the Gohonzon that you will lose the power.” And then, her prayer was answered after she had entered into the priesthood.

There are many people in this world with abilities which help others: doctors, teachers, counselors and so on. However, they do not understand whether their help or advice is truly of benefit to him or her through the future or not. Nichiren Shonin says, “Distinguishing between right and wrong should depend on teachings of the Buddha. Never depend on cleverness or supernatural abilities of people.” in his treatise Sho Hokke Daimoku-sho (Chanting the Odaimoku Is the Right Practice). This means that to help others in compliance with teachings of the Buddha, in other words, with the Odaimoku, is the best and certainly useful way among all means possible because it is the quintessence of teachings of the Buddha who can only see through our past, present and future life. Once we chant the Odaimoku, the practice erases our sins (Zaisho) from the past which causes bad results and let us accumulate merits (Kudoku) which causes good results. Consequently, we can live a happy life in the both present and future life.

Let’s look at a statement of Nichiren Shonin’s treatises. He says as following in Shishin Gohon-sho (The Four Depths of Faith and Five Stages of Practice):

A beginning practitioner in the Latter Age of Degeneration should take up the practice of chanting him or herself and having others chant Namumyohorengekyo. This is the spirit of the single moment of understanding by faith and the stage of rejoicing. This is the true intention of the Lotus Sutra.

He is telling that salvation by the Odaimoku is the faith in the Lotus Sutra and people who engage in the bodhisattva practice are followers of honge no bosatsu (bodhisattvas [lead by Jogyo] guided by the Primordial Buddha in the eternal past). We also see a statement of Nissen Shonin’s teachings:

A person who sets his or her heart on propagation should work hard on chanting the Odaimoku. Without chanting, no meritorious reward manifests. Without manifest meritorious rewards, it is hard to save incurably foolish beings in Mappo. Hence, we are the sect of chanting, which is the sect of the true faith. The true faith indicates the people who chant the Odaimoku.
[Geshu Ningai Kusho Singyo-sho]

This statement teaches us that to save people by both chanting oneself and having them chant the Odaimoku is the true intention of the Buddha, the true faith in the Lotus Sutra.

A master once said to me, “The most wonderful way of living as a human being is to live for others.” Humans are basically selfish and tend to live only for self-satisfaction. That is why the way of living for others is so beautiful and wonderful. To save other people with the Odaimoku does not need any special talent. By chanting ourselves and having a person chant the Odaimoku, everyone can save him or her by making meritorious reward from the Gohonzon manifest before the person’s eye. This is the true salvation, the true intention of the Lotus Sutra, and the heart of bodhisattva. Today’s Gokyoka instructs us in this way. 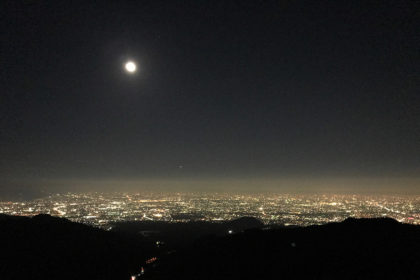